The Burly Doctor with a Quirky Smile

I remember watching him; his hands massive; his voice gruff and mannerisms crass thinking how ironic it was that this person examining my child was the opposite of how he was perceived by some in the community-including my mother. There was another pediatrician we could have chosen but there was something about this particular man; part-time artist; part-time writer; overtime doctor-to those of us who looked beyond the obvious. Whenever I saw him handle our children, I knew we'd made the right decision. Every time I needed him, he never let me down. Every time I'd call, this burly doctor with a quirky smile reassured me. When I was pregnant and very sick he was the doctor who came to our house to see me. When it was the week-end or the middle of the night and a child had an earache or rash or upset stomach or was congested he'd answer his phone and tell me to bring "the kid" up to his house. He'd leave the back porch light on for me.

More often than not his advice was simplistic. "The kids's not deaf. He's just lazy!" "There's no pill for the common cold. All that stuff you buy is a waste of money." When our 2nd child repeatedly became ill with the croup he told me to "wrap him up, put him in a sled and walk him around in the snow." My mother spoke up telling me it was too cold to take him out. But I did. Soon he was breathing easier. But one time-the sled thing didn't work. He ended up in the hospital with pneumonia. A few days later he was back home doing much better.

He went to sleep that first night home a little after ten. Around midnight I thought I heard some sort of a semi-truck roaring by. It was odd because trucks never passed through our neighborhood. I got up and looked outside though one window and then another. No trucks anywhere. Then I heard that noise again. It was coming from the baby's room. I found my son purple and gasping for air. The croup was back! Instinct told me no walk in the snow could help this time. As I wrapped him up in a blanket and scrambled for the car keys, the doctor was called. I wasn't surprised to find this pediatrician whom my mother called a quack already there as I rushed into the hospital. Two days later he underwent a tracheotomy. From meeting me at the door to the surgey and aftercare that man who'd become our Dr. Spock and guardian angel all wrapped into one never left our side.

When cancer claimed him years later my mother admitted he'd been a good doctor. I told her he was so much more.
Posted by Snarly Sally at 7:43 PM 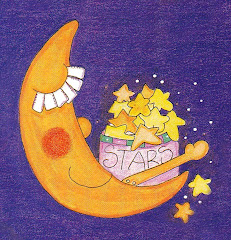